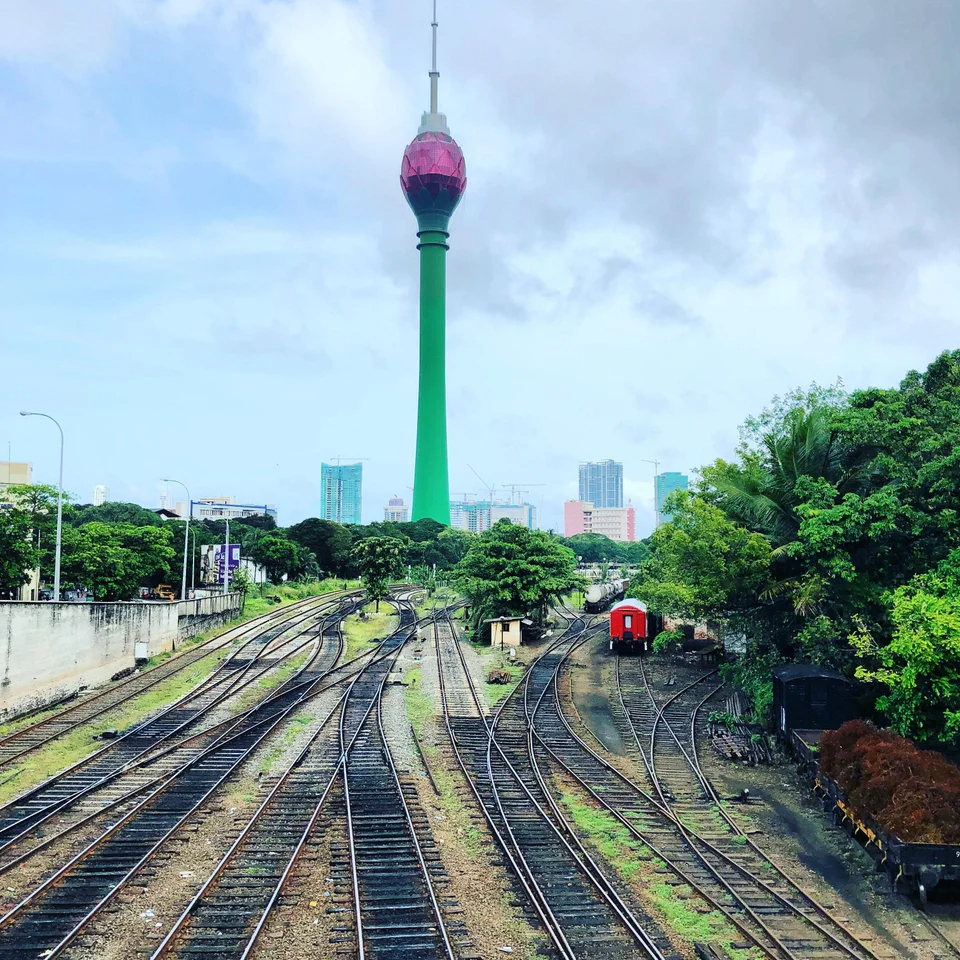 In the meantime, ITN, Hiru, Derana, and other media channels, which carefully select and broadcast the ‘good comments’ given by people who went to see the Lotus Tower, are constructing a public opinion about the Lotus Tower in the minds of ordinary citizens.

Seeing all this, we are going to talk about 10 things you must know about the Lotus Tower.

The first day’s income amounted to around 5,900 dollars. The cost of building the Lotus Tower was 113,000,000 dollars. That is over 50,000 million rupees in today’s terms. That means, regardless of the profit from the Lotus Tower, it will take 19,152 days, or 52 years to pay off the debt with this income, if we assume that people will continue to visit with the same enthusiasm for 52 years. But that won’t happen.

To be fair, this is not the sole income of the Lotus Tower. Additional income will come from the tower’s communication services, hotel rooms, and other things being rented out. But this will not be one of the tallest towers in South Asia for long. A building taller than the Lotus Tower is already under construction in Sri Lanka itself. We will come to that later. We also cannot assume that large business owners and governments in India and other South Asian countries are not interested in building the tallest building in the region.

In any case, not one tenth of the number of people who waited in queue on the first day will come on a future day. Most likely, in future, those ticket revenues won’t be earned over one day, but over a month.

Accordingly, it will take ten or fifteen thousand months to earn that income from tickets.

The Colombo Lotus Tower Management Company has said that it expects to earn an operating profit of 200 million rupees from the year 2024.

According to those numbers, it will still take about 200 years to pay off the debt.

Who will profit, if not the public? The Lotus Tower of the future will be accessible only to people in a certain economic stratus who can afford to dine in such hotels and spend time in luxurious places.

The super-rich private business owners who have set up businesses in the Lotus Tower are the ones who will earn a real profit.

The base of the tower has four floors. The kitchen, air conditioning system, and electrical operating system are in the basement. The guest entrance is on the ground floor. The first and second floors are reserved for shopping complexes. The third floor is reserved for meeting halls and open concerts. On the fourth floor are banquet halls that can be used for events like weddings.

The 600-seat revolving restaurant is located on the fifth floor.

The sixth floor has eight rooms that can be reserved for state guests, the seventh floor has a viewing booth, and the eighth floor has an air-conditioned plant room and an elevator plant room.

Only those who have the means to come and enjoy will visit. That means that an ordinary, ‘small’ dramatist cannot show a stage play in this hall. The tower will need to host large shows that sell highly expensive tickets. Even to have a wedding here, you’d need a lot of money. We cannot expect an ordinary citizen to benefit from this tower’s income.

We must also remember that this Colombo is not a deserted place where there haven’t been a place to have a big wedding.

Above all, the income goes to the Colombo Lotus Tower Management Company established under the Treasury. The tower has been leased to that company for up to 50 years.

03. People were chased away from the land

When a six-acre land was taken from D. R. Wijewardena Mawatha for this tower, which was built to entertain Sri Lanka’s elite even more than foreign tourists, and to present the campaign symbol of the Rajapaksas on a massive scale, poor people who used lived in small houses there were evicted. Those people were instead given small housing scheme apartments.

A Buddhist monk said that the Lotus Tower was like heaven. It is now the popular opinion in the world of Buddhist monks. Buddhist monks no longer see a life of austerity, dharma, or enlightenment as true bliss, but a luxurious, consumerist, and comfortable life. These monks don’t care who loses in this process. They have no problem hurting Muslims and Tamils by inciting racism. They have no problem that this tower was built for the rich to enjoy themselves while poor people were chased out of their homes and forced to live in housing schemes confined to houses like chicken coops.

We ask that knowledgeable monks who act against these backward ideas forgive the others.

In fact, even this opening happened during the Rajapaksa family’s 2019 election campaign. It was falsely opened before interior was developed, which includes the restaurants. But they sent in YouTubers and the media to create a fake hype.

Eighty percent of the cost of this project, which was initiated through a 67 million US dollar loan from the Chinese Exim Bank, was to be financed by Chinese loans and the remaining twenty percent by the Telecommunications Regulatory Commission. However, by the project’s completion, we had spent more. For one, Maithripala Sirisena said that a Chinese company that was involved in this project disappeared from it, taking 15 million US dollars with them. Even at that time, an Auditor General’s report revealed a lot of information about the waste, loss, and suspicious transactions of this project.

The interest on loans taken from China is almost eight percent.

07. Going to China? Will India be upset?

One of the main purposes of such a tall tower is installing communication and other transmission equipment. Even now, this tower is to be rented for equipment related to television, radio, and telephone communication.

But another important matter came up in recent discussions with China related to debt restructuring. China stated that it is not ready to restructure the debt that easily, and that it is ready to accept ownership of the constructions financed by Chinese loans instead. The Hambantota port, financed by Chinese loans, has already been handed over to China. Among the constructions to be handed over in the future, the Norochchole Power Plant is important in relation to energy, and the Lotus Tower is important in terms of diplomatic strategy. From the beginning, India suspected that the Lotus Tower would be used for subversive activities. You may remember the stir caused by the arrival of a Chinese ship in Sri Lanka recently.

If China tries to take over the Lotus Tower as payment of its loans, it is likely to lead to a diplomatic conflict with India.

08. The lotus tower will not be the tallest for long

Currently, the height of the lotus tower is 356 meters. But it is estimated that the height of the building called ‘One Tower’ that is being built by the Hyatt company on the other side of the World Trade Center in Fort is to be 376 meters.

It is true that some people who visited the Lotus Tower praised it. However, it is clear, from social media to what a random person on the street would say, that people’s opinion has changed about the Lotus Tower and other empty buildings financed with loans. After the recent struggle or ‘Aragalaya’, people are no longer who they used to be. There has been a change. Today people understand the lies behind these constructions. In the past, when we pointed out cases of fraud and corruption in these projects, we were branded as those who spoke jealously of development. But today it has become a very common opinion.

The illusion of massive concrete constructions created in people while rulers dreamed of ‘development’ since the open economy was introduced in Sri Lanka in 1978, has now ended. In 2006, when Mahinda Rajapaksa introduced his ‘Mahinda Chinthanaya’, he promised a series of tall constructions like Phallic Symbols, or the penis. The term ‘Wonder of Asia’ referred to a bunch of large buildings. Now those who pass the Town Hall, Gangaramaya, the Lotus Tower, and go to Fort, Galle Face, and Colpetty, will see such tall towers everywhere. Since the seventies, it was this collection of constructions that people called ‘development’.

By the project’s completion, instead of development, our country was stuck in a debt trap. The lie that was said about development has now been exposed. There are many super-rich people who have made extraordinary fortunes from commissions and contracts through these constructions. There is a culture of tall buildings for those rich people to enjoy. Even if all these crises end, that group of people will face no problems.

This country was not only ruined by the Rajapaksa family. Those who created a distorted picture of this construction culture, the wealthy class, and what development is should also be held responsible for this downfall.

It’s not the Tushita heaven that one sees from the top of these buildings. Instead, you see ordinary human lives below. You see millions of ordinary people fighting for their lives in Slave Island and beyond Maradana and Fort, permanently or temporarily residing in or passing through those areas. Do these people have fair access to education, health, and transportation? Are these people developed as humans? We must now ask whether the leisure, enjoyment, and fun available to the rich in the Lotus Tower can be accessed by people from below who struggle for their livelihoods and pay their taxes.